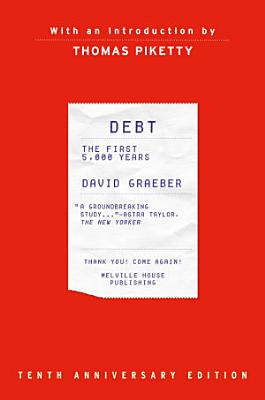 The classic work on debt, now is a special tenth anniversary edition with a new introduction by Thomas Piketty Before there was money, there was debt. Every economics textbook says the same thing: Money was invented to replace onerous and complicated barter systems—to relieve ancient people from having to haul their goods to market. The problem with this version of history? There’s not a shred of evidence to support it. Here anthropologist David Graeber presents a stunning reversal of conventional wisdom. He shows that for more than 5,000 years, since the beginnings of the first agrarian empires, humans have used elaborate credit systems to buy and sell goods—that is, long before the invention of coins or cash. It is in this era, Graeber argues, that we also first encounter a society divided into debtors and creditors. Graeber shows that arguments about debt and debt forgiveness have been at the center of political debates from Italy to China, as well as sparking innumerable insurrections. He also brilliantly demonstrates that the language of the ancient works of law and religion (words like “guilt,” “sin,” and “redemption”) derive in large part from ancient debates about debt, and shape even our most basic ideas of right and wrong. We are still fighting these battles today without knowing it. Debt: The First 5,000 Years is a fascinating chronicle of this little known history—as well as how it has defined human history. It shows how debt has defined our human past, and what that means for our economic future.

The classic work on debt, now is a special tenth anniversary edition with a new introduction by Thomas Piketty Before there was money, there was debt. Every eco

One of the few professional athletes on an entirely plant-based diet, Brendan Brazier developed this easy-to-follow program to enhance his performance as an eli

The complete guide to human resources processes, issues, and best practices by two of the most seasoned and respected HR professionals. Managing people is the b

The Four Things That Matter Most - 10th Anniversary Edition

Updated with stories from people who have been inspired by the original text, a guide to connecting with what matters most identifies four phrases for honoring

How maverick companies have passed up the growth treadmill — and focused on greatness instead. It’s an axiom of business that great companies grow their rev

The Ascent of Money

The 10th anniversary edition, with new chapters on the crash, Chimerica, and cryptocurrency "[An] excellent, just in time guide to the history of finance and fi

A book that took 10 years to make! A book about a bygone era of computing that never really rolled over and played dead, more like dug a tunnel and went undergr