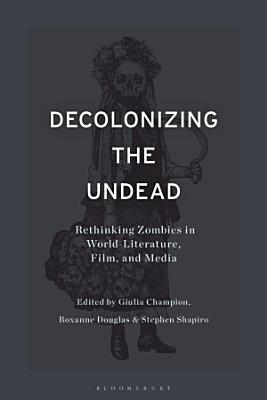 Looking beyond Euro-Anglo-US centric zombie narratives, Decolonizing the Undead reconsiders representations and allegories constructed around this figure of the undead, probing its cultural and historical weight across different nations and its significance to postcolonial, decolonial, and neoliberal discourses. Taking stock of zombies as they appear in literature, film, and television from the Caribbean, Latin America, sub-Saharan Africa, India, Japan, and Iraq, this book explores how the undead reflect a plethora of experiences previously obscured by western preoccupations and anxieties. These include embodiment and dismemberment in Haitian revolutionary contexts; resistance and subversion to social realities in the Caribbean and Latin America; symbiosis of cultural, historical traditions with Western popular culture; the undead as feminist figures; as an allegory for migrant workers; as a critique to reconfigure socio-ecological relations between humans and nature; and as a means of voicing the plurality of stories from destroyed cities and war-zones. Interspersed with contextual explorations of the zombie narrative in American culture (such as zombie walks and the television series The Santa Clarita Diet) contributors examine such writers as Lowell R. Torres, Diego Velázquez Betancourt, Hemendra Kumar Roy, and Manabendra Pal; works like China Mieville's Covehithe, Reza Negarestani's Cycolonopedia, Julio Ortega's novel Adiós, Ayacucho, Ahmed Saadawi's Frankenstein in Baghdad; and films by Alejandro Brugués, Michael James Rowland, Steve McQueen, and many others. Far from just another zombie project, this is a vital study that teases out the important conversations among numerous cultures and nations embodied in this universally recognized figure of the undead.