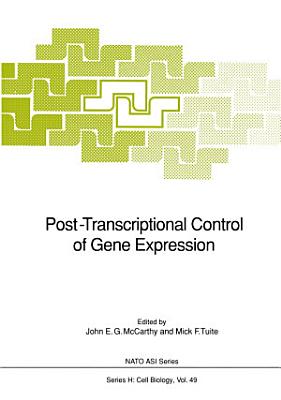 The last ten years have witnessed a remarkable increase in our awareness of the importance of events subsequent to transcriptional initiation in terms of the regulation and control of gene expression. In particular, the development of recombinant DNA techniques that began in the 1970s provided powerful new tools with which to study the molecular basis of control and regulation at all levels. The resulting investigations revealed a diversity of post-transcriptional mechanisms in both prokaryotes and eukaryotes. Scientists working on translation, mRNA stability, transcriptional (anti)termination or other aspects of gene expression will often have met at specialist meetings for their own research area. However, only rarely do workers in different areas of post-transcriptional control/ regulation have the opportunity to meet under one roof. We therefore thought it was time to bring together leading representatives of most of the relevant areas in a small workshop intended to encourage interaction across the usual borders of research, both in terms of the processes studied, and with respect to the evolutionary division prokaryotes/eukaryotes. Given the breadth of topics covered and the restrictions in size imposed by the NATO workshop format, it was an extraordinarily difficult task to choose the participants. However, we regarded this first attempt as an experiment on a small scale, intended to explore the possibilities of a meeting of this kind. Judging by the response of the participants during and after the workshop, the effort had been worthwhile.

Transcription is the most fundamental nuclear event, by which the information of nucleotide sequences on DNA is transcribed into RNA by multiple proteins, inclu

Regulation of Gene Expression in Plants

This book presents some of the most recent, novel and fascinating examples of transcriptional and posttranscriptional control of gene expression in plants and,

Gene Expression provides research papers on selected topics in gene expression, presented at the 11th meeting of the Federation of European Biochemical Societie

Molecular Mechanisms in the Control of Gene Expression

The OHOLO Conferences have been convened annually from the Spring of 1956; the wide areas they have covered, from different and overlapping disciplines, can be

Enhancers and Phase Separation in the Control of Gene Expression

Gene regulation underlies the control of cell identity, development, and disease. Transcription of genes is regulated by DNA elements called enhancers, which ar