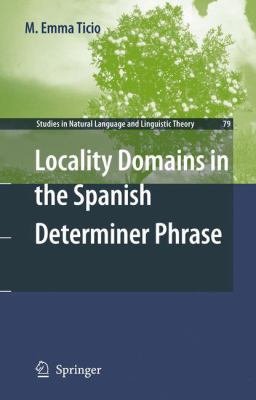 Examining its subject from a generative perspective, this highly detailed text deals with the syntax of nominal expressions. It focuses on empirical data taken from the Spanish language, though the author goes further to draw conclusions of wider theoretical interest from material culled from other languages too. The book considers crucial phenomena in the nominal domain, such as extraction out of nominal phrases and ellipsis in these phrases, as well as their modification. In doing so it provides the reader with a unified explanation of a number of phenomena that have not previously been analyzed under a single basic account. In particular, Ticio explores how economy notions interact with a number of functional categories, with the length and type of movements allowed, and with the existence of three internal domains within nominal expressions. She uses these observations to inform her analysis of the structure of arguments and adjuncts in nominal expressions, and of the potential these elements have for extraction. To test the empirical adequacy of her analysis, she employs phenomena such as the properties of attributive adjectives, partial cliticization and nominal elision in Spanish nominal phrases.

Examining its subject from a generative perspective, this highly detailed text deals with the syntax of nominal expressions. It focuses on empirical data taken

Examining its subject from a generative perspective, this highly detailed text deals with the syntax of nominal expressions. It focuses on empirical data taken

Locality offers a range of new perspectives on an important aspect of syntactic movement. The papers collected here explore locality in two ways: the first sect

A Phi-Syntax for Nominal Concord

The book focusses on the grammatical feature definiteness in German, visible in the inflection of adjectives (ein schön-es Kind vs. das schön-e Kind). It argu

Hispanic Linguistics at the Crossroads

This collection of articles, contributed by both experienced and novice researchers, addresses core issues in three different domains of Hispanic Linguistics: t

This volume presents novel analyses of morphosyntax and phonology by well-known scholars in their respective fields. The book offers chapters on a range of Roma

The Going Romance conferences are a major European annual discussion forum for theoretically relevant research on Romance languages. This volume assembles a sel

THE LICENSING OF NOMINAL AND VERBAL ELLIPSIS IN ROMANIAN

“The book is impressive through: (a) the general theoretical framework, well mastered, and by the global theoretical results; (b) the results related to the m