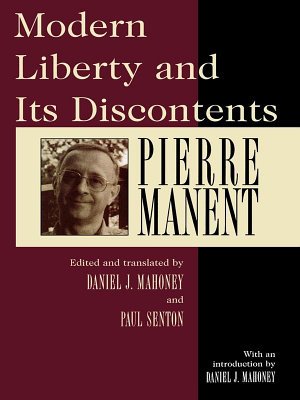 In this book, distinguished French philosopher Pierre Manent addresses a wide range of subjects, including the Machiavellian origins of modernity, Tocqueville's analysis of democracy, the political role of Christianity, the nature of totalitarianism, and the future of the nation-state. As a whole, the book constitutes a meditation on the nature of modern freedom and the permanent discontents which accompany it. Manent is particularly concerned with the effects of modern democracy on the maintenance and sustenance of substantial human ties. Modern Liberty and its Discontents is both an important contribution to an understanding of modern society, and a significant contribution to political philosophy in its own right.

Modern Liberty and Its Discontents

In this book, distinguished French philosopher Pierre Manent addresses a wide range of subjects, including the Machiavellian origins of modernity, Tocqueville's

Gladly to Learn and Gladly to Teach

For half a century, Ernest Fortin's scholarship has charmed and educated theologians and philosophers with its intellectual search for the best way to live. Wri

Commerce and Its Discontents in Eighteenth-Century French Political Thought

"By uncovering the ambivalence toward commerce in eighteenth-century France, this book questions the assumption that commerce was widely celebrated in the era o

The Cambridge History of Modern European Thought is an authoritative and comprehensive exploration of the themes, thinkers and movements that shaped our intelle

The Passion of Charles Péguy

In many ways, the development of twentieth-century literary criticism and theory can be seen as a prolonged struggle against the pervading influence of nineteen

Leo Strauss and His Legacy

With close to 15,000 entries, this bibliography is the most comprehensive guide to published writing in the tradition of Leo Strauss, who lived from 1899 to 197

This rich and varied collection of essays addresses some of the most fundamental human questions through the lenses of philosophy, literature, religion, politic

What is the modern turn in philosophy? In other words, what are the features that make modern philosophy distinctively “modern” in contrast with the pre-mod

Is There Still a West?

Founders of Modern Political and Social Thought present critical examinations of the work of major political philosphers and social theorists, assessing both th