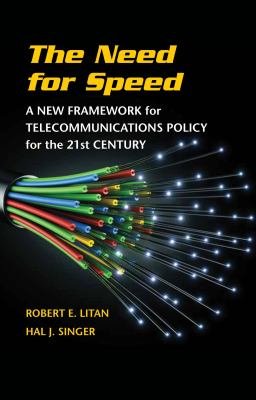 The twenty-first-century telecommunications landscape is radically different from the one that prevailed as recently as the last decade of the twentieth century. Robert Litan and Hal Singer argue that given the speed of innovation in this sector, the Federal Communications Commission's outdated policies and rules are inhibiting investment in the telecom industry, specifically in fast broadband networks. This pithy handbookpresents the kind of fundamental rethinking needed to bring communicationspolicy in line with technological advances. Fast broadband has huge societal benefits, enabling all kinds of applications in telemedicine, entertainment, retailing, education, and energy that would have been unthinkable a few years ago. Those benefits would be even greater if the FCC adopted policies that encouraged more broadband providers, especially wireless providers, to make their services available in the roughly half of the country where consumers currently have no choice in wireline providers offering download speeds that satisfy the FCC'scurrent standards. The authors' recommendations include allowing broadband providers to charge for premium delivery services; embracing a rule-of-reason approach to all matters involving vertical arrangements; stripping the FCC of its merger review authority because both the Federal Trade Commission and the Justice Department have the authority to stop anticompetitive mergers; eliminating the FCC's ability to condition spectrum purchases on the identity, business plans, or spectrum holdings of a bidder; and freeing telephonecompanies from outdated regulations that require them to maintain both a legacy copper network and a modem IP network. These changes and others advanced in this book would greatly enhance consumer welfare with respect to telecommunications services and the applications built around them.