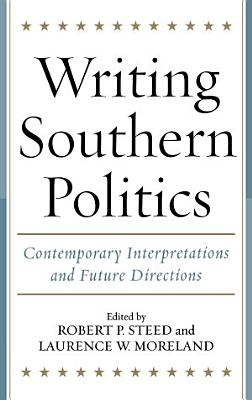 Scholars, journalists, writers, and pundits have long regarded the South as the nation's most politically distinctive region. Its culture, history, and social and economic institutions have fostered unique political ideas that intrigue observers and have had profound political consequences for the nation's citizens, politicians, and policymakers. Writing Southern Politics is the most comprehensive review of the large body of post--World War II literature on southern politics. Since the publication of V.O. Key Jr.'s landmark work, Southern Politics in State and Nation (1949), scholars have produced an astounding number of books, monographs, professional journal articles, and research papers addressing elements of continuity and change in southern politics. The contributors to this book sort through the literature, identifying major themes, examining areas of scholarly disagreement, and making the key dimensions and contours of the region's politics understandable. Individually, the essays in this volume identify and clarify the key writing and research in selected subfields of southern politics, including religion, race, women, and political parties. Collectively, the essays identify and discuss the major components of and trends in southern politics over the past half century. The contributors, some of the foremost scholars in the field, have been heavily involved in researching and writing about southern politics during the past three decades and have observed the development of many of the research projects that form the foundation of southern political literature. In many instances, their own writings are included in the body of literature they discuss, bringing unique skills, research, and perspectives to their original essays. In addition to reviewing existing literature, Writing Southern Politics also includes suggestions for a future research agenda. Not all aspects of the region's dramatic fifty-year transformation have been fully explored, and the continuation of this development ensures new avenues to examine. The discussion of past research and writing is an invaluable tool for understanding the trends in southern politics over the past half century. By examining these trends and developing an agenda for future research, the authors provide a roadmap for identifying the changes that will likely shape the region over the next half century.

Scholars, journalists, writers, and pundits have long regarded the South as the nation's most politically distinctive region. Its culture, history, and social a

Many historical myths are actually false yet psychologically true. This title looks myth and reality as complementary elements in the historical record.

Tremendous transformation marks the last three decades of American politics, and nowhere has this change been as distinctive and penetrating as in the American

Southern Farmers and Their Stories

The industrial expansion of the twentieth century brought with it a profound shift away from traditional agricultural modes and practices in the American South.

Since 1950, the South has undergone the most dramatic political transformation of any region in the United States. The once Solid-meaning Democratic-South is no

Social Transformations in India, Myanmar, and Thailand: Volume I

“This book focuses on the different challenges and opportunities for social transformation in India, Myanmar and Thailand, by centering communities and indivi

Originally published in 1987, this book shows that there is still considerable continuity in the practices and ideas of marriage in Afican against a background

In this study, we look at the potential for development leaps in Africa in three key sectors that provided the basis for socioeconomic development around the wo

Perspectives on the American South

First Published in 1981. In Perspectives on the American South we hope to gather, yearly, essays that deal with the society, politics, and culture of the region