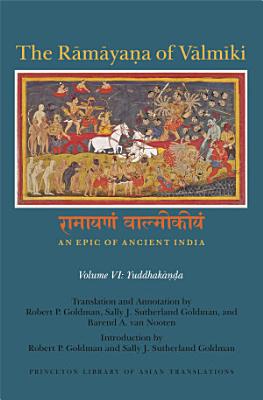 The sixth book of the Ramayana of Valmiki, the Yuddhakanda, recounts the final dramatic war between the forces of good led by the exiled prince Rama, and the forces of evil commanded by the arch demon Ravana. The hero Rama's primary purpose in the battle is to rescue the abducted princess Sita and destroy the demon king. However, the confrontation also marks the turning point for the divine mission of the Ramavatara, the incarnation of Lord Visnu as a human prince, who will restore righteousness to a world on the brink of chaos. The book ends with the gods' revelation to Rama of his true divine nature, his emotional reunion with his beloved wife, his long-delayed consecration as king of Kosala, and his restoration of a utopian age. The Yuddhakanda contains some of the most extraordinary events and larger-than-life characters to be found anywhere in world literature. This sixth volume in the critical edition and translation of the Valmiki Ramayana includes an extensive introduction, exhaustive notes, and a comprehensive bibliography.

The Rāmāyaṇa of Vālmīki: An Epic of Ancient India, Volume VI

The sixth book of the Ramayana of Valmiki, the Yuddhakanda, recounts the final dramatic war between the forces of good led by the exiled prince Rama, and the fo

The years 1830–1914 witnessed a revolution in the manufacture and use of books as great as that in the fifteenth century. Using new technology in printing, pa

The Art of the Qurʼan

Published on the occasion of the exhibition The Art of the Qur'an: Treasures from the Museum of Turkish and Islamic Arts, Istanbul, held at the Arthur M. Sackle

Studies in the Transmission of Latin Texts

This volume offers a comprehensive study of all the known manuscripts and incunables of two works: the history of Alexander the Great written by Quintus Curtius

Moral Reflections on the Book of Job, Volume 6

Gregory the Great was pope from 590 to 604, a time of great turmoil in Italy and in the western Roman Empire generally because of the barbarian invasions. Grego

The book represents the largest treasure trove of fragments of medieval Hebrew manuscripts found in book-bindings in Italian libraries and archives. It presents