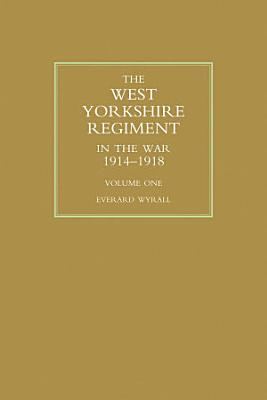 Another weighty regimental history, two volumes, 820 pages in all covering the record of twenty-two battalions in France, Flanders, Italy and Gallipoli (all of them served on the Western Front). When war broke out the regiment consisted of two Regular battalions (1st and 2nd), two Special Reserve (3rd and 4th) and four Territorial battalions (5th to 8th); the 1st Battalion went to France with 6th Division in September 1914, the 2nd Battalion came home from Malta to join the newly formed 8th Division (Regular) and went to France in November 1914. Both battalions remained in the same brigades (18th and 23rd) and divisions throughout the war. The four Territorial battalions each formed a 2nd and a 3rd line battalion; the four original battalions made up the 146th Brigade, 49th (West Riding) Division, arriving in France in April 1915, the second line battalions combined to make the 185th Brigade, 62nd (2nd West Riding) Division which arrived in France in January 1917. Kitchener's call to arms resulted in eleven Service battalions being raised, 9th to 18th (the 17th was formed as a Bantam battalion) and 21st; of these only 13th and 14th did not go on active service. The 21st Battalion became a Pioneer battalion in 4th Division and the 22nd was a Labour battalion which also went to France. This history records events in chronological order, the dates of the operations being described are shown in the margin as are the identities of the battalions involved. Volume 1 (x + 355pp with 18 maps and 15 b/w photos) covers the period from the outbreak of war to the end of 1916, the close of the Somme offensive and includes the Dardanelles campaign where the 9th Battalion was in action with the 11th (Northern) Division. On 1st July 1916, the first day of the Somme, the 10th Battalion attacked at Fricourt and incurred the heaviest casualties of any battalion - 710, of whom 307 were killed including the CO, 2IC, adjutant and two company commanders. More than half of them are in in Fricourt New Military Cemetery which is in the No Man's Land across which they attacked and where they died. The CO (Lt Col Dickson) and his adjutant (Capt Shann) lie side by side. There is a Roll of Honour for the period covered in which the other ranks are listed alphabetically by battalions as are the Territorial battalion officers; the other officers are shown in one group in alphabetical order with the battalion number in front of the name. Although the note at the head of the officer casualty list states that the theatre in which death occurred is France and Flanders unless otherwise indicated, nonetheless 'Gallipoli' is not shown against the names of the officers of the 9th Battalion who died there, and so one is left with the wrong impression they died on the Western front.

WEST YORKSHIRE REGIMENT IN THE

In the past, while visiting the First World War battlefields, the author often wondered where the various Victoria Cross actions took place. He resolved to find

William Mitchinson analyses the role and performance of the Territorial Force during the first two years of World War I. The study looks at the way the force wa

The 'Pals' battalions were a phenomenon of the Great War, never repeated since. Under Lord Derby's scheme, and in response to Kitchener's famous call for a mill

The Empire on the Western Front

When Great Britain and its dominions declared war on Germany in August 1914, they were faced with the formidable challenge of transforming masses of untrained c

Slaughter and Stalemate in 1917

This book offers a fresh, critical history of the 1917 campaign in Flanders. Alan Warren traces the three major battles fought by the British Expeditionary Forc

The Die-Hards in the Great War: Vol. 1

The 'Die-Hards' is the nickname of the Middlesex Regiment, earned at the battle of Albuera in the Peninsular War in May 1811. The Regiment was one of five that