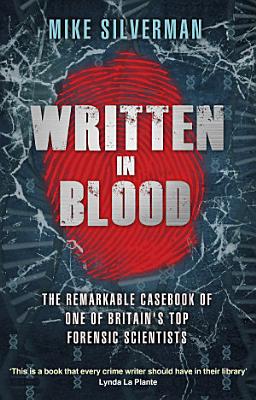 As one of the UK’s leading forensic scientists, Mike Silverman has helped to identify and convict dozens of murderers, rapists, armed robbers, burglars and muggers, thanks to the evidence they – or their victims – unwittingly left behind at the scenes of their crimes. Mike Silverman started his career in the days when fingerprints were still kept on card files and DNA profiling was just a pipe dream, so Written in Blood is more than just a casebook – it is also a definitive history of the development of forensic science over the course of the past thirty-five years. From collecting blood samples at gangland executions to investigating forensic science failings, including in the murders of Rachel Nickell and Damilola Taylor, Mike Silverman’s unique career provides a fascinating insight into the ways forensic science is used to help solve real-life crimes. Packed with genuine crime scene photographs and original sketches, Written in Blood is the ultimate insider’s account of the fascinating world of forensic science.

As one of the UK’s leading forensic scientists, Mike Silverman has helped to identify and convict dozens of murderers, rapists, armed robbers, burglars and mu

ONE WORD CAN REWRITE THE STORY OF YOUR LIFE Abduction. Torture. Surrender. My entire life has been framed, it has been created, by eleven months when I was four

Accident or Murder? The Petersons seemed like the ideal couple: well-respected, prosperous and happy. All that came crashing down December 2001, when Kathleen a

In the 1870s, sixteen-year-old Jim Doolen leaves British Columbia for the Mexican border in search of the father who left ten years earlier, following a clue in

Vampires, chilling supernatural creatures of the night – do they really exist? The British Isles has a remarkable association with the realms of the undead, f

The Tomlinson Prize–winning, “stimulating and informative” account of one of the most significant clashes on the Eastern Front of the Great War (Journal o

A fundamentally new interpretation of the emergence of modern terrorism, arguing that it formed in the Russian literary imagination well before any shot was fir

Extraordinary accounts of forensic crime detection—from poisoners in ancient Rome to modern day serial killers—by the bestselling author of The Outsider. In